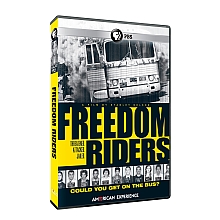 Attracting a diverse group of volunteers—black and white, young and old, male and female, secular and religious, northern and southern—the Freedom Rides of 1961 took the civil rights struggle out of the courtroom and onto the streets of the Jim Crow South. Freedom Riders tells the terrifying, moving, and suspenseful story of a time when white and black volunteers riding a bus into the Deep South risked being jailed, beaten, or killed, as white local and state authorities ignored or encouraged violent attacks. The film includes previously unseen amateur 8mm footage of the burning bus on which some
Freedom Riders were temporarily trapped, taken by a local twelve-year-old and held as evidence since 1961 by the FBI.

In 1961, U.S. Supreme Court decisions that overturned racial segregation in interstate travel were largely ignored in the
South. To challenge this status quo, more than 400 black and white Americans, called Freedom Riders, performed a simple
act: they traveled into the segregated South in small interracial groups and sat where they pleased on interstate buses.
The Freedom Rides began on May 4, 1961, with a group of thirteen Riders recruited and trained by the Congress of Racial
Equality (CORE). By the summer, the Rides had evolved into a broad-based movement involving hundreds of activists
from local, regional, and national civil rights organizations. Finally, on September 22, the Freedom Riders triumphed. The
Interstate Commerce Commission issued a sweeping desegregation order. As of November 1, Jim Crow signs had to be
removed from bus stations. Every interstate bus had to display a certificate: “Seating aboard this vehicle is without regard
to race, color, creed, or national origin, by order of the Interstate Commerce Commission.” The Freedom Rides led to
further federal civil rights legislation and have become a model for grassroots movements to bring about social change.

The filmmaker, Stanley Nelson, creates a powerful and searing documentary by pairing archival footage with interviews.
The videotaped interviews with some of the Riders transport viewers back to the events and horrors the Riders faced.
Many endured savage beatings and imprisonment. Interviewees include: John Lewis, a college student who now serves
as a member of Congress; Joan Trumpauer, then a nineteen-year-old secretary in Washington, DC, who spent months
in Parchman State Penitentiary, the harshest prison in Mississippi; Jim Zwerg, a Wisconsin student on exchange at Fisk
University, who was hospitalized after a mob beat him with bats and pipes in Montgomery, Alabama; Hank Thomas, a
student at Howard University who became active in SNCC; Diane Nash, who had led successful non-violent student protest at Fisk University and monitored the progress of the Rides from Nashville, Tennessee, recruiting new Riders and speaking to the press; and John Seigenthaler, Attorney General Robert Kennedy’s man on the ground, who recounts events from the perspective of the government and later became a victim of mob violence himself.

May 21, 1961: a Sunday in the age of John F. Kennedy’s New Frontier, when freedom was on the line in Montgomery,
Alabama. Over a thousand black Americans, including Martin Luther King, Jr., had gathered at the First Baptist Church
to support a band of activists known as Freedom Riders. Just blocks from the state capitol, where Jefferson Davis had
sworn allegiance to the Confederate cause in 1861, First Baptist had been the setting for a number of dramatic events.
But the church had never witnessed anything like the situation that was unfolding. For hours the Freedom Riders sang
songs and listened to testimonials about courage and commitment. But as hope rose inside the sanctuary, a mood of
defiance developed outside.

By nightfall the church was besieged by white protesters defending segregation. Screaming racial epithets and hurling
Molotov cocktails, the protesters threatened to overwhelm a beleaguered group of federal marshals who feared that the
mob was intent on burning the church to the ground. When it became obvious that the marshals were overmatched, the
governor of Alabama, John Patterson, deployed a National Guard battalion to disperse the crowd. It was morning before
the streets were secure enough for the Freedom Riders to leave the church. Loaded into a convoy of military trucks, the
Freedom Riders were escorted back to a black community that must have wondered what other challenges lay ahead.
The battle of May 21 was over, but the struggle for racial justice would continue.

How the Freedom Riders came to be at First Baptist, why they inspired so much hope and fear, and what happened
to them—and the hundreds of other Americans who joined their ranks—are the questions that drive the American
Experience documentary Freedom Riders. These are questions that should engage anyone concerned with freedom,
justice, and the realization of America’s democratic ideals.

With plot lines rivaling those of the most imaginative fiction, the saga of the Freedom Rides is an almost unbelievable
story of sacrifice and triumph. In 1961, during the first year of Kennedy’s presidency, more than 400 Americans
participated in an experiment designed to awaken the conscience of the nation. Inspired by visions of social revolution,
these Freedom Riders challenged the mores of a segregated society by performing a disarmingly simple act. Traveling in
small interracial groups, they sat where they pleased on buses and trains and demanded unrestricted access to terminal
restaurants and waiting rooms, even in areas of the Deep South where such behavior was forbidden.

Patterned after a 1947 Congress of Racial Equality (CORE) project known as the Journey of Reconciliation, the Freedom
Rides began in May with a group of thirteen Riders recruited by CORE’s staff. By early summer, the Freedom Rides had
become a movement involving hundreds of activists representing a number of civil rights organizations. Attracting diverse
volunteers, the movement transcended the traditional approach to civil rights, taking the struggle out of the courtroom
and into the streets and jails of the Jim Crow South. Empowered by two U.S. Supreme Court decisions mandating the
desegregation of interstate travel facilities, the Freedom Riders flouted segregation statutes, all but daring southern
officials to arrest them.

The Riders challenged federal officials to uphold the constitutional right to travel without being subjected to degrading
racial restrictions. They did so knowing that their actions would almost certainly prompt a savage response from white
supremacists. Invoking the philosophy of non-violence, they put their bodies on the line for racial justice. After marauding
Klansmen used bombs to disrupt the original CORE Freedom Ride, student activists from Nashville organized a Ride
of their own, forcing federal officials to intervene on their behalf. Later, when Mississippi officials placed hundreds of Freedom Riders in prison and imposed bond payments that threatened the financial solvency of CORE, the net effect was to strengthen rather than weaken the movement.

While they characterized the Civil Rights Movement as an irrepressible force, the Freedom Riders knew all too well that
they faced enemies backed by regional and national institutions. Fortunately, those who participated in the Freedom Rides
had access to institutions of their own. When they boarded the “freedom buses” in 1961, they knew that others had gone
before them, figuratively in the case of abolitionists and the soldiers who marched into the South during the Civil War and
Reconstruction, and literally in the case of the CORE veterans who participated in the 1947 Journey of Reconciliation.
The successes of the NAACP and the strengthening of the Civil Rights Movement since the Second World War, along with
the decolonization of the Third World, infused Freedom Riders with the belief that the arc of history was tilting in the right
direction. Progress was possible, and the Riders were determined to do all they could to accelerate the pace of change.

Raymond Arsenault is the John Hope Franklin Professor of Southern History and co-director of the Florida Studies Program at the
University of South Florida, St. Petersburg. He is the author of several books, including Freedom Riders: 1961 and the Struggle for
Racial Justice, which became the basis for the Freedom Riders documentary.