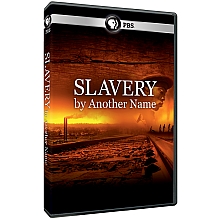 Slavery by Another Name

It was a shocking reality that often went unacknowledged, then and now: a huge system of forced, unpaid labor, mostly affecting Southern black men, that lasted until World War II. Based on the Pulitzer Prize–winning book by Douglas Blackmon, Slavery by Another Name tells the stories of men, charged with crimes like vagrancy, and often guilty of nothing, who were bought and sold, abused, and subjected to sometimes deadly working conditions as unpaid convict labor. Interviews with the descendants of victims and perpetrators resonate with a modern audience. Christina Comer, who discovered how her family profited from the system, says that “the story is important no matter how painful the reality is.”

By 1865, despite the promise of the Emancipation Proclamation, the Thirteenth Amendment, and the Confederate defeat
in the Civil War, many former slaves did not in reality experience “a new birth of freedom.” The Republican-controlled
Congress enacted the Fourteenth Amendment (enshrining birthright citizenship and equal protection of the law) in 1868
and the Fifteenth Amendment (guaranteeing the right to vote for all men regardless of race) in 1870. However, states and
communities across the South ignored these federal mandates by passing “black codes,” laws that served to essentially
re-enslave African Americans. Local law enforcement officers cited regulations against vagrancy, loitering, or walking near
railroads to arrest, incarcerate, and sentence African American men to work as forced convict laborers in factories and
mines and on farms. Drawing public attention to some of the victims and perpetrators of this forced labor system, the film
Slavery by Another Name presents a story that has been largely ignored in history books.

W. Fitzhugh Brundage on Slavery by Another Name

For African Americans after the Civil War, the abolition of slavery in 1865 was a landmark in human history. But
blacks came to recognize that while slavery had been abolished, their newly secured freedom was at risk despite the
Reconstruction-era constitutional amendments. New forms of coerced labor proliferated in the post-Civil War South, as
trumped-up criminal charges were used as a pretext for the virtual re-enslavement of thousands of able-bodied southern
black men and women.

The origins of these exploitative practices lay in a toxic confluence of postwar economic dislocation, weak state institutions,
and white racism. Impoverished southern state governments had to contend with the expense of a new class of state
charges—black criminals. Previously, slaveholders had punished black criminals privately. Now the costs of criminal justice
ballooned. With state governments desperate to offload the expenses associated with convicts and white landlords eager to
secure cheap labor, state and local authorities began to lease out convicts to contractors who paid the convicts’ legal fees.

While some white workers fell victim to the convict-leasing system, the economic vulnerability of African Americans meant
that black men and women were the system’s principal targets. Thousands of innocent blacks were coerced into forced
labor between the 1870s and 1940s. Countless black men were charged with the spurious offense of vagrancy, which
could have been applied to almost any black man in the rural South. Then they were brought before a county judge and
fined. Because many of the men couldn’t afford to pay the fines, they were sentenced to a term of hard labor. Court and
legal fees were levied. As a result, their sentences were often extended; they would work for a portion of their sentence
to pay off their fines for vagrancy and the remainder of their sentence to pay off their court fees. After their sentence
was determined, their labor and, for all practical purposes, their bodies were sold to mine owners, lumbermen, planters,
railroads, or corporations. In return the company paid a monthly fee to the county, which would eventually satisfy the
convicts’ outstanding fines and fees.

The thousands of black people falsely imprisoned in mines, lumber camps, brickyards, quarries, and plantations were
victims not of an anonymous bureaucracy but rather of the face-to-face cruelty and contrivances of white authorities,
both prominent and obscure. Once the convicts left their cells in the South’s local jails, they became de facto slaves to
the companies who had leased them. With virtually no legal liability for the treatment of the convicts, convict contractors
ruthlessly exploited them. Convicts were maimed by their work and by the punishments they received from their guards,
and many died from malnutrition and disease. Only a minority survived the ordeal with their bodies intact.

For many white southerners, this system fostered the belief that there was a rise in black crime, cementing the
relationship between criminality and race. Among African Americans, it created profound and enduring disillusionment
about the significance of emancipation.

Occasionally, an upstanding state prison official would protest the convict-leasing system. But wherever convict leasing
was commonplace, too many local officials profited from the system to tolerate serious reform. Even the federal
government turned a blind eye to the practice. During Theodore Roosevelt’s administration, the Department of Justice
displayed concern about coerced labor in the South. Although a few courageous white southerners took the lead in
exposing the practice of convict leasing and secured the conviction of several prominent planters and officials, prosecution
through the courts failed to end convict leasing. The planters and companies that leased convicts learned that skilled legal
defenses could ensure that even successful prosecutions for peonage only won token fines.

It was not until the 1940s that economic changes and political pressures finally brought an end to the exploitation of southern
convicts. Changes in southern agriculture and industry had diminished the need for large numbers of disposable laborers. World
War II lent strength to organized efforts by the NAACP and labor unions to end convict leasing. Concerned about egregious
violations of civil rights that tarnished the United States’ international reputation, President Franklin D. Roosevelt in 1941
ordered the Department of Justice to prosecute convict labor cases. Only then did the Justice Department hasten the end of an
institution that had thrived for more than three quarters of a century after the abolition of slavery.

W. Fitzhugh Brundage is the William B. Umstead Distinguished Professor and Chair of the Department of History at the University of North
Carolina, Chapel Hill. He is the author of A Socialist Utopia in the New South: The Ruskin Colonies in Tennessee and Georgia, 1894–1901
and Lynching in the New South: Georgia and Virginia, 1880–1930.