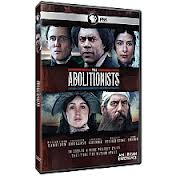 The Abolitionists vividly brings to life the struggles of the men and women who led the battle to end slavery. Through innovative use of reenactments, this three episode series puts a face on the anti-slavery movement—or rather, five faces: William Lloyd Garrison, impassioned New England newspaper editor; Frederick Douglass, former slave, author, and activist; Angelina Grimké, daughter of a rich South Carolina slaveholder; Harriet Beecher Stowe, author of the enormously influential Uncle Tom’s Cabin; and John Brown, ultimately executed for his armed seizure of the federal arsenal at Harpers Ferry. The film’s release in 2013 also marked the 150th anniversary year of the Emancipation Proclamation.

Beginning in the 1830s, several religious, social, and political reform movements swept through the United States. Among
the men and women leading these reforms were abolitionists who fought to end slavery, an institution they believed to be
incompatible with the founding principles of the nation. Animated by religious convictions and faith in progress, early white
and black abolitionists hoped that moral persuasion would convince slaveholders to free slaves voluntarily. To this end, they
promoted the establishment of anti-slavery societies and engaged in a massive print campaign to distribute broadsides
and pamphlets across the nation. By the 1840s, convinced that moral persuasion would not end slavery, they turned to
concerted political action. Abolitionists argued that slavery was a political and an economic as well as a moral dilemma for
the nation as the institution repudiated the principles embodied in the Declaration of Independence and the Constitution.

In the decade preceding the Civil War for many in the North, abolitionists had successfully fused their vision of a moral
nation with a political ideal of progress based on a free-labor economy. When the United States plunged into civil war, most
Americans realized that the fate of slavery rested on the outcome of the war. On January 1, 1863, President Lincoln issued
the Emancipation Proclamation, abolishing slavery in the states in rebellion against the United States—a decision that
became a turning point in the nation’s history. The combined actions of the President and thousands of ordinary men and
women, black and white, enslaved and free, culminated in the ratification of the Thirteenth Amendment abolishing slavery
throughout the United States in 1865. The amendment gave legal force to the principle argument of the Declaration of
Independence: that all men are created equal.

Richard S. Newman on The Abolitionists

The abolitionist struggle was America’s first civil rights movement. For nearly a century following the American Revolution,
waves of abolitionists fought to end both slavery and racial injustice. From visionary free black activists and runaway slaves
to shrewd lawyers and advocates of civil disobedience, the abolitionist movement was also diverse and constantly changing.
As the aging abolitionist hero Frederick Douglass commented in the 1890s, it would take American historians years to
understand just what abolitionism had accomplished. In many ways, we are still learning about the brave men and women
who put their lives on the line to slay slavery.

Although the most important era of abolitionism occurred before the Civil War, the movement had deep roots in American
society. In 1688, a quarter of religious visionaries issued the Germantown Protest challenging Quakers to eradicate
slaveholding in their midst. A bevy of runaway ads in colonial newspapers also testified to enslaved peoples’ constant stride
for freedom. By the revolutionary era, these antislavery traditions inspired the creation of the world’s inaugural abolition
societies. The Pennsylvania Abolition Society debuted in 1775; twenty years later, abolitionist groups stretched from Rhode
Island to Virginia. Led by men of conscience (such as Quaker pamphleteer Anthony Benezet) as well as antislavery jurists
(including constitutional law expert William Rawle), early abolitionists identified bondage as an affront to American liberty.
Success came slowly but abolitionists did achieve key results. By the early 1800s, they had secured gradual abolition laws
(or outright bans on bondage) throughout the North, built international antislavery alliances, and passed slave-trading bans
in Great Britain and the United States. Even black abolitionists expressed optimism about the future. “It is in our posterity
enjoying the same privileges with your own,” legendary black activist Richard Allen challenged white Americans in 1794,
“that you ought to look for better things.”

Slavery’s massive growth derailed Allen’s dreams. By the 1830s, when the United States contained roughly two million
enslaved people (or quadruple the number of 1776), a more confrontational generation of abolitionists appeared in American
society. Spurred by free black activism in the North, as well as British and Caribbean antislavery struggles, abolitionists now
espoused immediate (not gradual) attacks on slavery; they also eschewed moderation. Influenced by religious revivalism,
immediate abolitionists called slavery a sin and Americans hypocrites for not embracing universal emancipation. “I will not
equivocate,” William Lloyd Garrison famously declared in The Liberator in 1831, “and I will be heard!”

Yet the growth of abolitionism after 1830 depended on a multitude of activists. Once marginalized, African Americans and
women now played essential roles in the movement. In towns large and small, African Americans built powerful abolitionist
networks. In Philadelphia James Forten provided funding to Garrison’s radical newspaper while in New York David Ruggles
convinced white as well as black activists to aid fugitive slaves. Following in the footsteps of the militant black pamphleteer
David Walker, antebellum African Americans envisioned themselves as the vanguard of a global freedom struggle.

Both men and women knew that abolitionist activism was exhilarating yet dangerous. Whites North and South argued that
abolition would undo the nation’s economy. Many whites also opposed abolitionist visions of racial equality. Abolitionists were
verbally threatened, and sometimes brutally assaulted, above as well as below the Mason-Dixon line. In May 1838, it took all
of four days before a Philadelphia mob torched Pennsylvania Hall, a spectacular new building dedicated to abolitionist free
speech. The hall was never rebuilt.

Such opposition prompted further abolitionist change. In the 1840s and 1850s, as slavery grew still further, abolitionists
formed political parties, supported physical confrontations with slaveholders, and advocated compensated emancipation in
the South. If abolitionists could not end slavery before the Civil War erupted in 1861, they still exerted a powerful influence
on the nation’s political culture. By attacking slavery as unjust and championing racial equality in the ringing tones of the
Declaration of Independence, abolitionists envisioned the United States as anything but a slaveholding Republic. Indeed, it
may have taken sectional strife to eradicate American bondage. But without generations of abolitionists seeking liberty and
justice across the color line, the very idea of racial equality would have been impossible, now no less than in 1865.

Richard S. Newman is Professor of History at Rochester Institute of Technology. He is the author of Freedom’s Prophet: Richard Allen, the
AME Church, and the Black Founding Fathers and The Transformation of American Abolitionism: Fighting Slavery in the Early Republic.